Download Our Free Report - Improve Your Preshot Routine, FREE!
You are here: Home / Golf Psychology Articles / How to Follow Up a Low Round

Going Low After a Low Round

There is nothing in golf more exciting than shooting a career low round. When you’re playing great and scoring well, golf is fun, immensely satisfying, and feels second nature.

To shoot a personal best round, it takes a hot putter, a short game that is more precise than usual, plus a modicum of luck. But it also takes smart course management, complete focus on the task at hand, and total self-composure.

Somehow, the excitement stirred up by a barrier-breaking low score has to be contained-and that goes for a tour professional on his way to shooting 59 or a 20-handicapper who is breaking 90 for the first time.

David Duval felt that excitement at the 1999 Bob Hope Chrysler Classic when he carded the second 59 in PGA Tour history. Starting Sunday’s round Duval thought 11 under would give him a chance to win.

If you saw the round, you are well aware he didn’t scramble his way to that magic number of 59. Duval’s ball-striking was impeccable that day, setting up close-range birdie putts on basically every hole. Most of his putts were less than five feet in length, with only three putts between 6 and 12 feet.

The damage report: one eagle, 11 birdies, and six pars.

What prevents amateurs from shooting the scores they are capable of?

I believe many players limit themselves with so-called comfort zones, just to mention one barrier.

A comfort zone becomes a problem whenever a player is playing better than expected or is breaking new ground. I teach golfers how to break out of self-limiting expectations and preconceived beliefs.

Comfort zones actually benefit pro golfers when they can bring a poor round back into their scoring zone and turn a score of 76 into a 72.

His goal is to get to five under. This attitude, adopted by many professionals, is far from the mindset of the amateur who is playing better than expected or on the verge of shooting a personal best score.

Winning a golf tournament or shooting your lowest score is a great accomplishment… Following that up with a strong performance in the next tournament can be extremely challenging.

The reason why some golfers have difficulty with replicating performances or consistency is their level of preparation often changes.

How do you follow up a good round or tournaments with another?

After a successful tournament, you should definitely celebrate that success. You worked hard to play at that high level. Perhaps, even reward yourself for your efforts, but then get back to what made you successful in the first place.

Why change what works? Sticking with the plan is key when trying to follow up after a successful tournament.

Justin Thomas understands the importance of getting back to work after a victory.

Thomas, who turned pro in 2013, won the 2017 PGA Tournament, his first Major Championship. Despite mandatory media obligations, Thomas knows that if he is to be successful in the next tournament, he needs to quickly get back to his preparation and focus on the task at hand.

Thomas is focused on one thing… the next thing, which is the FedExCup playoffs.

THOMAS: “It definitely was tough, just the way everything kind of happened the next three or four days after the PGA [Championship victory]. I tried to forget about it as quick as possible… It was like, look, it’s awesome. I’m extremely happy I did it. I’m proud of myself and proud of me and my team. It’s over with, and you know, I’ll enjoy it in the off-season when I can enjoy it and don’t have to worry about the next tournament… [The FedExCup] is the No. 1 priority now since the majors are done.”

Be Aware of Mindset That Prevent Your From Going Low

A prediction of this type is the root of comfort zones. It’s the most common self-destructive belief among golfers, and Trevor, as you could see, is a perfect example of it. This expectation-based syndrome is rooted in what you think is a realistic score for the day.

How can you ever lower your scoring zone if you think that you will always score within an expected range? Your only possible chance is to get lucky one day to play above your expectations. You are what you think you are. In this case, you can only shoot what you think is possible to shoot.

The first step in breaking free of preconceptions is to not set target scores or focus on what score you want to shoot any given day. Target scores are nothing more than expectations in disguise.

If you’re a 20 handicap and you are happy with “bogey golf,” you’ll play for a bogey on every hole. With this attitude, you will most likely fall short and make too many double-bogeys. The same is true for golfers on the pro tours who focus too much on making “the cut” so they can play on the weekend.

Adopting an attitude of “I need to make the cut,” they end up focusing too much on the cut, ride the cut line, and either make or miss it by a shot. This is why Tiger Woods sets a goal of winning every tournament he plays in.

Yes, he has a ton of confidence and it’s a lot to ask of himself, but he sets his sights high to push himself towards excellence. If he falls short of winning, he earns a top ten.

Most golfers that play the tour avoid setting target scores. Scott Verplank is one example of a player who achieved a career-low round using this philosophy, shooting 62 one year in the Milwaukee Open. He believes golfers should not make judgements, before they play, about what is a “good score’ to shoot.

He plays his best golf, as do many golfers, when he doesn’t focus on score.

“If you don’t think about score and you just play the game and prepare yourself before you tee it up, there is no limit to what you can shoot. If you don’t pay attention to score then your ability to shoot low is increased,” Verplank said.

Unlike top Tour Pros, amateurs stop themselves short of breaking new scoring milestones because they bring into play self-defeating labels and lack of confidence.

For example, if you label yourself as a 90 plus player, then that label becomes a self-fulfilling prophecy, which prevents you from breaking 90 when you are in the midst of a good round.

Therefore, if you do break 90 for the first time, that core belief prevents you from moving to the next level-you beat yourself-and your scoring self-image remains a “90’s player.”

You might credit the good round to luck or to the ease of the course.

This only serves to justify the core belief: “I’m not good enough to shoot in the 80’s.”

One of the biggest challenges after shooting a personal low round is to follow it up with another low round, which is similar to trying to shoot a better score than your personal best round.

Golf can be a cruel, inconsistent game. One day you are on top of the world after playing great and the next day you can’t hit a solid shot. US Open winner Steve Jones said one of the biggest challenges in golf is posting another low round after shooting a career low.

He, like other players, realizes that golf changes everyday.

“It’s impossible to be at the top of your game every single week. Physically you change, the courses change, conditions change, the bounces you get change, everything changes so much. To put the mind and the physical together-it has to be a combination,” said Jones.

Thinking Outside the Box

You have to learn how to think beyond the box and move outside of your comfort zones to achieve greater golfing success and continue to shoot low scores.

Thinking beyond the box starts with identifying the barriers to success that hold you back from shooting lower scores. It also means looking at your game from another perspective, thinking differently about how you play, and changing old habits of thinking and behavior. Here one way to think outside the box after shooting a personal low round…

Often the labels we give ourselves become limiting beliefs.

Examples of ways we use labels include:

These labels form your golfing self-image. Once you break an important scoring milestone (90, 80, 70, etc.), a new scoring self-image has to form.

Just breaking 90 once will not help you form a new self-image. To continue to shoot in the 80’s you have to accept low score as the norm and not the exception.

This means you have to believe on any day that you can score in the 80’s. Otherwise the label “I always shoot in the 90’s” will limit your ability to continue to break 90 repeatedly. 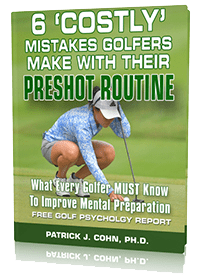